Particle counting may be performed using two different techniques, each with their own limitations and interferences, but one aspect they share in common is that they are both only a quantitative count. Neither method identifies the composition or source of the particles, they only provide a level of particles per ml of sample. 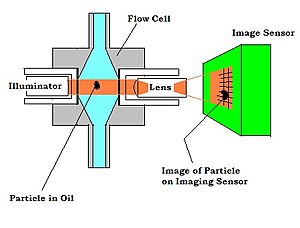 Optical Particle Counting is a method that uses an intense light source like a laser to shine a beam through a flowing sample; the light is aimed at a photodetector, which is set to count shadows. The first limitation of this test is reasonably well-known, and that is that other contaminants like air bubbles, water and soft particles (insolubles, the pre-cursors to varnish) can also create shadows and be counted as particles. This tends to lead to skew the results higher, unless the sample is properly degassed, diluted and/or sonicated. The other limitation is less well-known, and that is that related to how the shadow is sized in order to report the size of the particle.

The photodetector can measure the area of the shadow, which it then uses to calculate the size of the particle by assuming what is called spherical equivalency. Essentially, to use a two-dimensional shadow to represent a three-dimensional particle, it must be assumed that unobserved dimension is smaller than either of the observed dimensions, and then it is further assumed that the particle is a sphere. A sphere would cast a circular shadow, so the area is calculated to determine the diameter of a circle of the same area.

Optical Particle Counting does not measure particles by their longest dimension, nor their shortest or average dimension, but rather by assuming every particle is a sphere. As an example of how misleading this might be, consider a rectangular chip that is 10 microns long, and only 1 micron wide or thick; this particle would be assumed to be no larger than 3.6 microns, and therefore would not be included in the reported values (since they begin at 4 microns and larger). 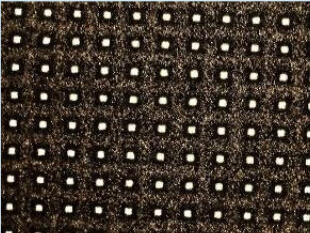 Pore Blockage Particle Counting is method that uses calibrated screens to monitor the flow decay of a sample pushed through at a constant pressure. As the screen plugs, fewer pores are completely open and the screen will trap smaller and smaller particles. The profile of the decay in flow can be correlated to the quantity of different sized particles within the fluid. This method is not skewed by air bubbles, water or soft particles, nor does it assume the particles are spheres, but it does extrapolate all the particle sizes from a singular pore size (commonly 5, 10 or 15 micron pores in the screen).

While pore block is not prone to the same inaccuracies as optical particle counting, it is nevertheless not directly measuring each individual particle either. For this reason, particle counting should always be trended for major shifts in the data, primarily looking at the ISO codes, rather than delving into the actual counts.

For specific information on other measured parameters, bookmark this page for future updates. Coming up next: Understanding ISO Codes.

View all posts by: Evan Zabawski