Proper report interpretation is crucial to the success of an oil analysis program; however, many users struggle to decipher the more than 40 pieces of data included on a routine report. The best procedure is to read the whole report in a methodical order, section by section. The following three tips will outline how this can be done, yet take less than two minutes per report.

TIP #1: Read the entire report, from top to bottom, without skipping any information or jumping to highlighted sections.

Starting at the top, look at which machine the sample belongs to, and how the sample was rated. Consider known information about the machine (recent issues, maintenance or failure history) and then review the severity (normal, marginal or critical) of both the machine and the lubricant.

Next, review the machine and lubricant information to establish expectations; e.g. is this a gearbox that is expected to have higher wear compared to hydraulic system? or does the machine lack filtration and particle counts are expected to be higher? Is this an AW (antiwear), EP (extreme pressure) or R&O (rust and oxidation inhibited) oil? and what is its grade?

Then review the laboratory’s comments to get a preview of the factors that drove the report’s severity.

TIP #2: Decide which values appear to be abnormal, but do not attempt to decipher how or why, simply assign each abnormal value a label of “cause” or “effect”.

Upon beginning to look at the sample data portion of the report, first review the lubricant and machine hours (if reported) to ascertain the predicted trend, i.e. continued service would suggest wear, contamination and degradation to increase, whereas a recent oil change would see the opposite effect. 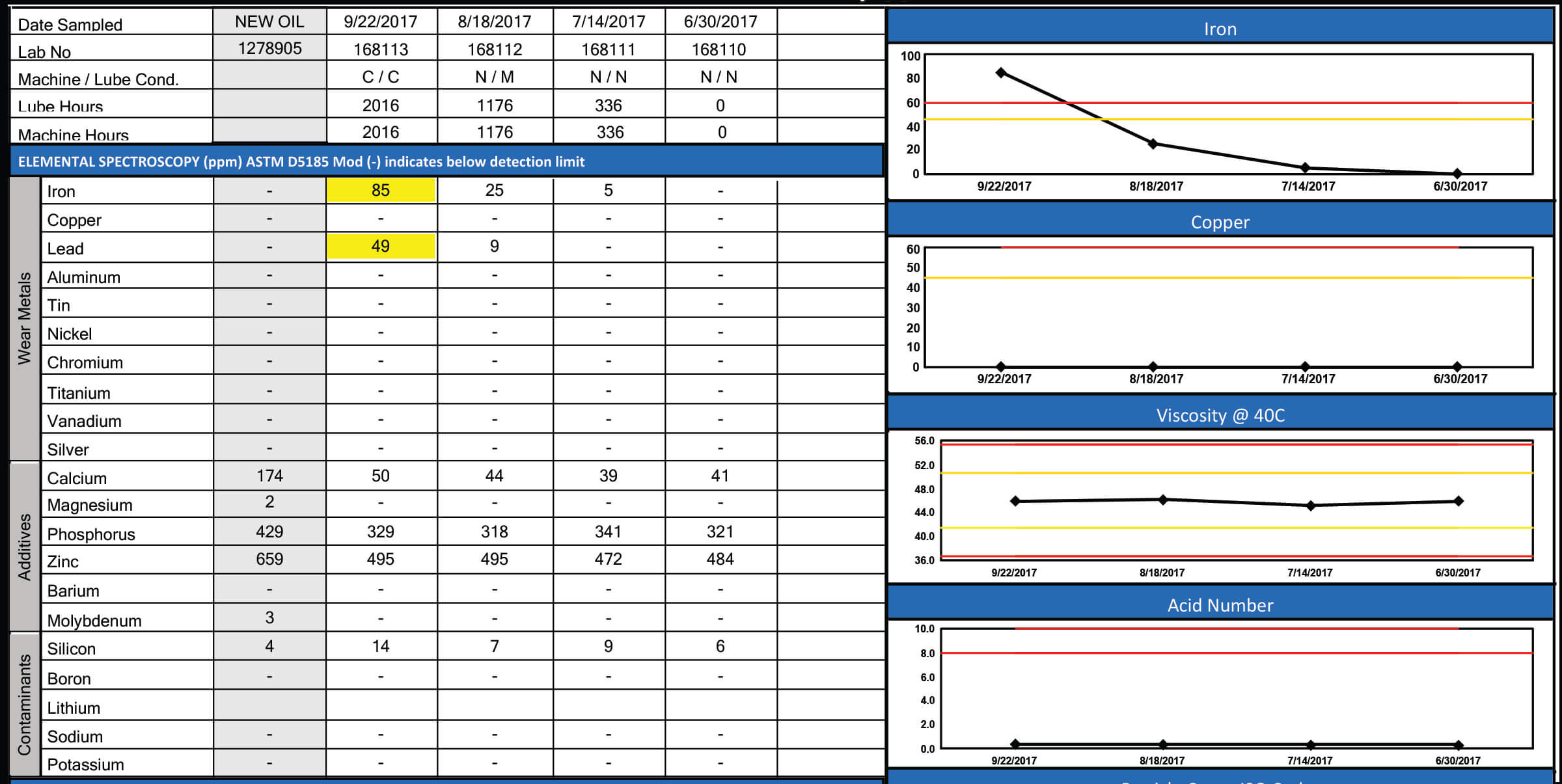 From this first section, iron and lead are clearly abnormal and would likely be labelled as “effects”, since some other mechanism (time, viscosity, contamination) would have caused the wear metals to appear. Though silicon was not highlighted by the lab, it could be labelled a “cause” since high iron or lead would not cause silicon to appear, but high silicon could cause more iron and lead wear.

In this next section, the elevated particle count would definitely be labelled a “cause”, along with the previously assigned silicon. Though acid number is trending higher, it has followed a very smooth 0.04 increase between each sample. Water, however, has not and should be considered abnormal and would also be labelled as a “cause”.

The same can be said for sliding wear, which is never considered normal, regardless of size. Corrosion is also an “effect”, as would be red oxides, as they were likely accelerated by the water content noted earlier. Dark metallic oxides are caused by high contact pressure, usually from lubricant starvation, so they must be labelled as an “effect”.

Lastly is the elevated level of dust/dirt which will likely be labelled as a “cause”, which would force silicon and particle count to be relabeled as “effects”, since dust/dirt could cause both to increase.

Upon reaching the end of the report, there should only be one or two causes, with every other abnormal value labelled as an effect of one or more of these causes. For this report, the causes would be elevated dust/dirt and water content.

TIP #3: Decide what follow-up action would either confirm the cause or remedy the situation. The best action is rarely to simply change the oil.

In this case, investigating all points of ingression (fill cap, dipstick, breather, hatch cover, etc..) could potentially address the root cause of both “causes”. While simply changing the oil would see these abnormalities disappear from the next sample, the same problem would recur in due course.

Even if an obvious fault was found, e.g. broken or missing breather, even after the repair the oil should not be changed. If the current level or wear or contamination can be tolerated, leaving the same fluid in service gives the next sample the definitive ability to confirm if the repair was successful by returning with nearly identical results, not lower/better.

Following these three tips will:
1) Prevent missing anything by reading the whole report
2) Decrease the time spent reading reports by avoiding partial interpretations along the way
3) Improve the effectiveness of follow-up actions by addressing causes, not symptoms or effects

As the Marketing Director for TestOil, one of my duties is to manage this website by keeping the content relevant and interesting to visitors. Please spend some time reading our blog posts and learning more about what we love to do...oil analysis. I sincerely hope you enjoy your experience!

View all posts by: Mary